Up early and checked out, we were ready to be picked up for our tour into the Mekong Delta. We left our big backpacks at the hotel (as we would be staying one more night after the tour) and boarded our bus. It took around 3 hours to reach the Delta where our first stop was a local family's "home" where we ate fruit and drank tea while they performed traditional music during which the heavens opened. The set up was a tourist trap even being offered a CD of the music and did not feel genuine at all - not helped by two other tour groups! Performance over and with it still bucketing it down it was time to board our hand rowed sandpan to explore the narrower tributaries of the Delta. It was time to get wet - very wet! We covered up as best we could with all our waterproof covers over bags etc but we were drenched in seconds. You just have to go with it though and its still stinking hot. The sandpan was the part Nick had been looking forward to the most and although it was good fun (even in the rain) it was over in less than 5 minutes where we were deposited at a traditional Coconut Candy making workshop where our guide explained how it was made before getting to sample it. Both Nick and I wondered how traditional this was and whether they would be making it if there were not tour group after tour group being filed though. We then boarded a larger boat (the rain had stopped by this point and we were already drying nicely) to go for lunch in a fruit orchard which was ok and where we got talking to a nice couple from Poland. It was then back to the boat where we sailed along the Mekong for a couple of hours taking in the scenery before re-boarding our bus to visit the Nam Mô Đương Lai Hạ Sanh Di Lặc Tôn Phật Temple with its huge laughing and reclining Buddhas. Again though this felt rushed as we had to be back on the bus for a 2.5 hour journey to our hotel in Can Tao where we were pretty much given a key and told to be ready for 06.30 the next morning. Hmmm. This was not living up to our expectations at all and we were regretting not paying the extra money to use the tour company we had used for Halong Bay. Our room was very basic but comfortable enough so we popped out for food at a nearby restaurant which served everything you can think off (and would not want to eat!) rat, dog, snake and even hamster. We had want we think was chicken and pork but can't be 100% sure before heading back to the hotel.

Very early the next morning and after a surprisingly good sleep and basic breakfast (a Dairylea slice, bread roll and a tiney tiny banana) we walked to the river to get back on our boat to visit the famous floating market at Can Tho. Even though there were lots of tourist boats and people trying to sell us things (they would hook onto the boat!) this actually felt more genuine as there were actual locals buying and selling. Our guide explained what the different boats were selling and how you could tell by the bamboo poles they had displaying their products. She then said that Gordon Ramsey had recently visited the markets and tried a snake blood wine concoction before vomiting into the river and insulting everyone by saying "if it moves they will eat it". After looking at the menu the previous night I tend to agree with him! http://www.youtube.com/watch?v=ODg309JkPRo While trying to leave the markets it all got a bit heated with lots of the smaller boats fighting for our business and at one point we were completely surrounded and our boat managed to snag one of their ropes - it was all very entertaining! Finally we broke free and set off to visit a rice paper workshop. Fearing the worst after the previous days tourist traps we were pleased to end up in what appeared to a be a genuine "factory". They were working so fast and kept telling us to get out of the way (again making us believe it was real) and our guide explained the process and showed how the paper is dried and then made into rice noodles. Very interesting. Back on the boat and this time we were heading for a fruit orchard where our guide explained all of the different fruits they grow in the Delta which was really interesting. Sadly at this point the heavens again opened so it was cut short while we fled for shelter and a chance to sample the fruit, I didn't expect to get a whole pineapple. From here it was about an hour on the boat back to the hotel where we had lunch before getting the bus back to Ho Chi Minh. Nearly 5 hours later we arrived and checked straight back into our hotel where of had time to shower and book a hotel in our next destination before heading out to meet Corina and Teresa (again) for dinner.

To my annoyance Nick had told them that it it was my birthday and bless them they had got me a party hat and a little cake with a sparkler in it (which was very amusing when Corina was bent under the table trying to light it in secret but the ceiling fan kept blowing it out!). Our meal was delicious and in a great restaurant where they help locals by teaching them English and giving training in Catering and Hospitality. Excellent food and service and more importantly and excellent venture. Go here if you are in town. 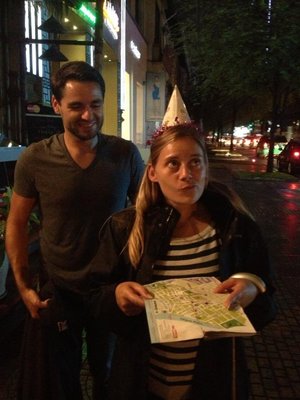 Sadly the night ended sooner than we would have wanted as we were on the early bus to Cambodia in the morning, so we said our goodbyes (again!)