hmmm not the most tourist friendly place

Even though everything was in Cyrillic we easily navigated ourselves from the airport to the Hostel using the very good airport express train (320 Rubles each £6.20) and the metro (a 5 trip card is a bargain at 150 Rubles £3 and can be used up to 90 days). Transport is about the only thing that is cheap in Moscow. The metro was very similar to the one in St petersburg with amazing architecture and escalators that seemed to go on forever.

Faro Hostel http://faro-hostel.com/gallery/ was above a Torture Museum which was kinda quirky and meant it was on a main street near all the tourist spots. Unfortunately this hostel appeared to have mostly Russian occupants who were actually living in the Hostel. One guy who was a student had been there 6 months and was planning to stay for longer. This made the Hostel feel like you were intruding in someones house. The first day we sat down to do some googling the rest of the guest got up and left making us feel very insecure. It seemed to only be the younger ones that made an effort to talk to us, we soon decided we would only go back when we needed to. Rant over now to Moscow.

This was more like the Russia we were expecting to see; the buildings are massive, the roads wide and no tourist signs. After checking in we decided to go for a ‘small’ walk to get our bearings, and soon found ourselves at the Kremlin and the Red Square which looks really nice lit up at night. Now this is humungous it took nearly 10 mins to walk along one side of the fortress wall to Red Square and St Basil’s Cathedral which again looked great night. Along side Red Square there is a posh shopping mall called GUM, again super sized and lit up like as if christmas time. We decided to go inside to warm up and discovered it was as beautiful inside as well as was outside http://www.gum.ru/en/history/. Down all the aisles were small fake trees with beautiful autumnal leaves between two white benches and then in the centre where all the isles met there is a lovely fountain with water shooting up in different formations in to a smaller fountain. Apparently this is the main meeting place in Moscow like our Left Lion if you say met at the fountain they know it's this one. By this time it was getting late so we walked back in drizzly rain, popped to a supermarket and tried to settle in for a good nights sleeps... 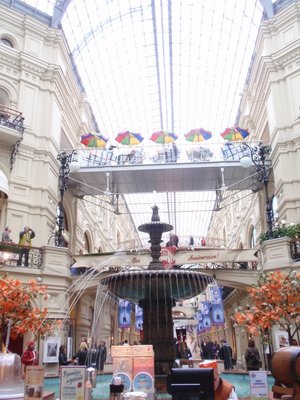 ...however, our room mates had other ideas. Since we have been traveling neither Nick or I have slept as badly as we did in this hostel. It was smelly, all 4 four of room mates snored so loudly and there was a lot of noise from the street outside. Somehow I managed to fall asleep, but poor Nick only got about 1 hour.

Feeling pretty lousy after very little sleep and hostile Russians, we ate our breakfast (with yet more stares!). Our plan was to do the walking tour run by the same company as the St Petersburg one, but the weather was lousy. Instead we headed to The Kremlin and despite all of the warnings about giant queues we waked straight in (well through strict security first). RUB 350 (£7) each. I think both Nick and I had something very different in our heads when we pictured the Kremin thinking it was like their version of the Pentagon. How wrong we were. Kremlin simply means Walled City, meaning many of Russia’s towns and cities have their own version. It is huge and very beautiful, with ornate towers along the walls circling it. Understandably you are only able to walk around a very small part of the complex - it is where their government is housed after all. The main area is centered on Cathedral Square where 5 golden domed Russian Orthodox churches have stood in one form or another since the Middle Ages. They are beautiful in carved white marble and with every interior surface elaborately painted, however they are all virtually the same, so once you have been in one, you have kinda seen them all. You are also able to pay an extra entry fee to go to the Armory (which surprisingly does not hold any weapons) where Russia’s greatest treasures are held - the Crown Jewels, Guilted Carriages and numerous Faberge Eggs - however the entry fee was too expensive for our meager budget! Feeling a little underwhelmed, we set off to buy some extremely expensive coffee to try and warm up and dry off. After another sleepless night we were up and on the Metro heading to the meeting point of the walking tour, however somehow while we were underground we had managed to get ourselves turned around, coming out of the wrong exit. We then spent 15 minutes trying to find the meeting point, but by now we were far too late and were both getting very annoyed at Moscow...

..but then, I spotted what looked like a tour group not too far away. We went for it and luckily for us it was the right one. The tour guide Elena was great, welcoming us straight away, telling us what we had missed. So feeling less annoyed at Moscow we settled in for the tour which took us to another couple of churches before returning to St Basil’s and Red Square, the GUM shopping Mall, the Tomb of the Unknown Soldier to see the changing of the guards. Even though this route repeated some of what we had done the previous day it was great to revisit it and get some background from her.

As the tour ended we decided we would meet her again later that evening to do their Communist Russia walking tour (as we had been jilted by the one in St Petersburg!!), so after an early dinner we made it to the meeting point in plenty of time although in torrential rain! We were joined on the tour by Kalvin (another Australian - they really are everywhere!), so it was great to be in such a small group so we could ask as many questions as we waned - which we did! The tour started at the former headquarters of the KGB which is now the headquarters of the FSB (arguably the same organisation!) before heading across town. Elena explained what life was like under the Communist Regime and how brainwashed and terrified people were. She told us a story of a famous 13 year old Russian child who told the KGB that his father had made anti-Communist remarks. His father was executed! She was a fascinating guide and shared loads of personal stories about her family and how her grandparents had queued for days to get a coat. She even remembered when she was a child her parents had smuggled a Snickers bar and some cans of Coke back from a trip outside the USSR - the Snickers bar was split 5 ways and one day a month she was allowed a can of Coke - her favourite day! Really interesting!

Stalin actually did a lot of good things for the city building the metro system, creating theatres, concert halls, knocking down run down buildings (building exact replicas in their place) and even widening a busy street to help traffic flow and fit his tanks down for parades- although this meant moving a few buildings back 45 feet as he didn't want to destroy them. They dug tunnels under the buildings put them on rails and pushed them forward. Admittedly he did use the slave labour of the Russian people to do it. 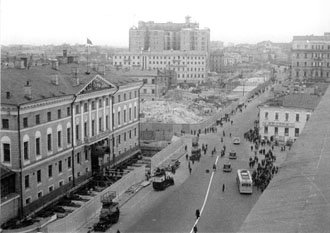 Next we went to the beautiful Eliseevsky supermarket a bit like Harrods or Fortnum and Mason after the war and during the whole communist regime this was one of only a few places where so could get a variety of products although you would have to be there early and queue for for hours. Today it is a very reasonably priced supermarket, we even brought food for dinner. The tour finished at the worlds 3rd largest McDonalds, literally days after the iron curtain fell, the huge fast food restaurant was built and had massive queues of people wanting to experience their first ever Big Mac. Elena showed us a picture of the queues snaking round the block and commented on how similar it this looked like the queues of people going to see Lenin when he died. 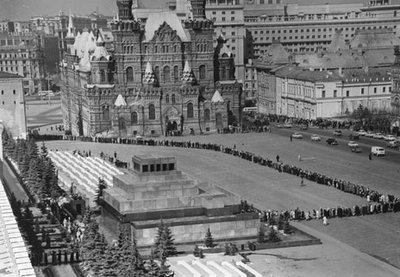 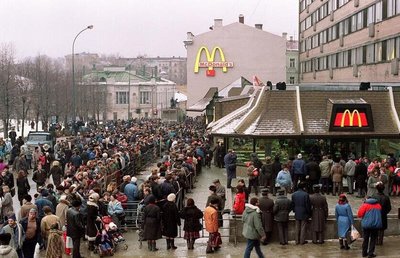 Our flight the next day was an evening flight so we decided to have a lazy morning before going to the Fallen Monument Park. After getting a little lost finding the park and ending up in the beautiful Gorky Park (Moscow's Central Park) we finally arrived at this unusual place. Basically it where statues come to die. When all the statues of Stalin were torn down this is where they came, along with lots of other communist statues and other controversial statues. This place is eerie with winding paths taking you past small and incredibly large statues some which are pretty, some that are weird and some that really make you think. It was in the process of being renovated when we visited so wasn't completely open but was free to enter and will look fab when it's finished. From here we headed back collected our bags and went to the airport. Yet again we had to go through lots of security and used the last of our Rubles to buy an over priced bottle of water and sprite at £6 (we couldn't afford a coffee). Then we set off on our Areoflot flight...