In need of some serious TLC

Four hours later and we had arrived in Dusseldorf and after a 15 minute walk arrived at our hostel (Backpackers Dusseldorf http://www.backpackers-germany.de/TL/index.php/about_us.html). It had received really good reviews and certainly was not cheap but we were instantly disappointed when we got there. It was dirty, smelly and in need of a serious refurb - we were also unlucky enough to be sharing with the resident weirdo. While we were in Belgium and doing some planning we nearly extended our stay and were so relieved we didn't - but we thought suck it up it's only for two nights.

We made our stuff as secure as we could and set off to explore the sights of D-Town (as the locals call it). Know the fact that the Tourist Information widely promote their "Dusseldorf in One Hour" self guided walk should have given us some clues, but 3 hours later (most of which was spent drinking coffee in a cafe) we realised we had "done" D-Town in less time than it had taken to travel there 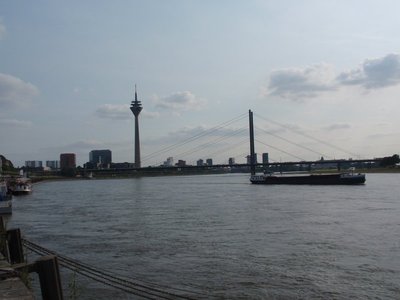 The next day we decided to catch the tram to Cologne - again we had heard really promising things so wanted to check it out, but again were disappointed as we found a large, dirty city. The twin-spired Cathedral which the city is so proud off (you name the souvenir it has a picture of it - mugs, t-shirts, fridge magnets etc) is so filthy you can barely make the carvings out on it! 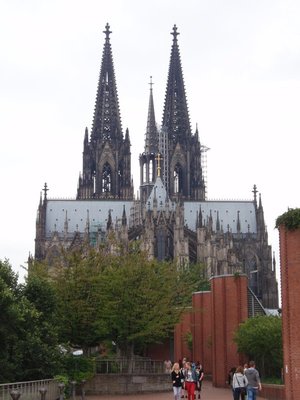 We had heard rave reviews of both Dusseldorf and Cologne, but think we must have missed something as we didn't really like either of them much. I think both would be good if you were coming on a Boys Trip and were just planning on drinking etc as they had loads of nice looking cafes and bars, but in terms of sight-seeing and culture (the main focuses of our tour) there was not much to see!

By the end of the two days we were on a downer. Germany was not living up to our expectations and we were worried about what we would find in Frankfurt thinking it would be more of the same.

Early on Friday morning we were up and thankfully checking out of the hostel. I was annoyed at Nick though as when the owner asked if he had enjoyed his stay he gave the very British response of "everything was fine" (I have since left a scathing review!!).

Posted by Nick-n-Charlie 17:00 Archived in Germany