An hours train ride from Bern and we had reached Interlaken at the foot of the snow covered Alps. The hostel Alplodge http://www.alplodge.com was easy to find and was much better than we had expected. It was part hostel part hotel so we managed to get the best of both!

After checking in and sorting a few bits out it was off to explore what Interlaken had to offer. We sat in a park and had lunch with an incredible view of the Jungfrau in the background. Unfortunately as we had arrived on a Sunday afternoon all of the Tourist Information offices and supermarkets (luckly we had pasta and pesto leftover for the night before) were closed meaning we could not do our usual routine when first arriving somewhere - we were going to have to play it by ear!

We knew that the weather was promising to be perfect on the Monday and had been debating whether we should take the very expensive train ride (CHF197 each) up to the top of Jungfraujoch (the highest train station in Europe). We had been pre-warned that if there is even one cloud in the sky not to bother making the trip. As usual I picked up lots of fliers from the station and hostel of things to do and also as usual read every bit of them. In doing this I managed to discover an "earlybird" ticket. If you get the first train at 06.35 then you can save yourself about CHF50 per person.

So 05:00 Monday we were up ready to judge the sun, it was already shining and there was not a cloud anywhere on the horizon (which always lifts Nick's day) so we went for it! We made the train in plenty of time (very unlike us! well me) and we were off up the mountain. The train ride takes 2.5 hours in total with 2 changes along the way. Even on the slow train ride up the scenery is amazing! Emerging out of dark tunnels and being greeted with snow covered peaks! The final train stopped twice on the way up actually inside the mountain where they had carved "windows" in the side of the mountain so that you could get views out.

We finally reached the station (still inside at this point) and after a quick change into warmer clothing we were off to explore. Nick was feeling a little dizzy from the altitude, but was not about to let that stop him. We followed the marked tour and went through various exhibits before reaching the Sphinx Terraces - a 360 external viewing platform on the outside of the station overlooking the Alps. There are no words that can describe this view! 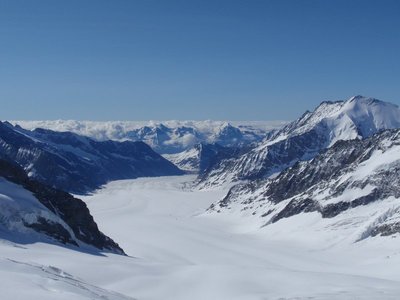 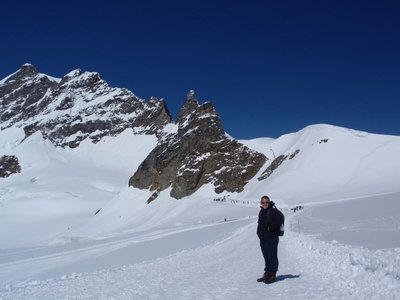 We spent a good 2 hours exploring, there was also an hour snow walk you could do on the glacier, however after walking a little of it and stopping because it was quite steep, it was my turn to feel lightheaded and queasy. We then realised it had been 6 hours since we last ate and so decided we had to catch our train back down. Our original plan had been to get a train to Grindelwald where we were hoping to do a walk, but as our train pulled into the first station, Kliene Schinegg ,I spotted a walking sign pointing in the direction of Grindlewald saying 2.5 hour hike. That didn't seem bad, so after getting food (two Bratwurst, two slices of bread and two drinks, CHF 26, good though) we decided to do the decent by foot and were rewarded with beautiful views of snow capped mountains turning into rolling meadows. Upon reaching Grindlewald and after another clothes change, stripping down to the bare minimum, we were really feeling the heat of the sun and decided to cool down by going to a small supermarket and treating our selves to an ice cream. 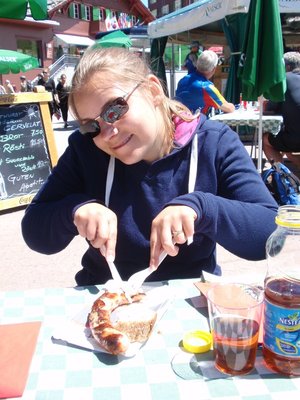 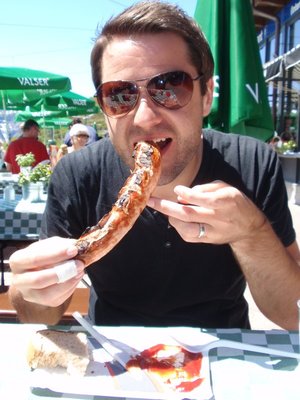 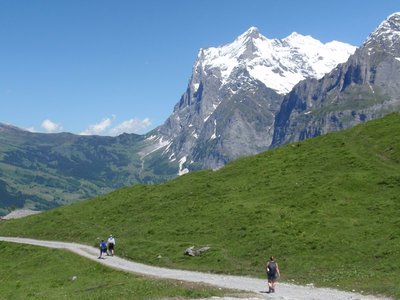 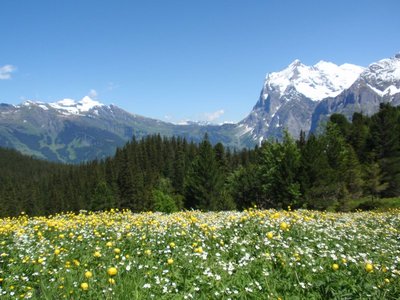 Tuesday saw the need for a rest day so we decided to walk to lake Thun, we had seen a sign the day before saying it was 10 mins by bike so thought that was not far to walk. We kept walking and came to a lovely nature reserve with tree covered paths, an hour and a half later we reached the lake, Doh! It was worth it though as we entered the town Neuhaus and were greeted with a beautiful lake that had a public park right on the lakeside and an area for swimming, (Nick was brave and went for a swim even after the people before him squealed with the cold). The day was supposed to be a bit of a write off as it was going to be thunder storm all afternoon till evening. However the weather was on our side and we managed to sit in the baking heat (well I kept finding shade) for most of the day. By the afternoon we decided we would go to the little cafe further round the lake and discovered a deal for strawberries and ice cream so yet again treated ourselves. We were just deciding to make the walk home when the staff at the cafe started to franticly move tables and umbrella inside. We looked up to see storm clouds coming our way, so we gathered our things paid our bills and headed back to the hostel. We managed to get most of the way there before the heavens opened, lucky all the buildings in Switzerland have little overhangs so we hugged the side of the street to keep some of the rain off. We made it back with barely wet clothes just as the rain became torrential and thunder started to roll. 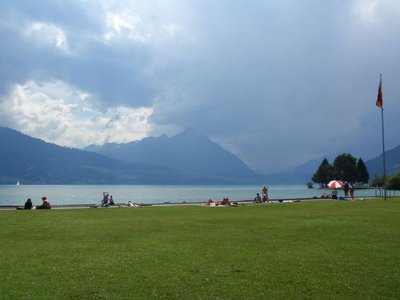 Wednesday and sadly the thunderstorm from the night before had not cleared the air completely and we awoke to a fairly cloudy day with the prospect of heavy rain in the afternoon. We caught the train to nearby Lauterbrunnen and then walked the 40 mins (in sunshine randomly?!) to the Trummelbach falls; 10 glacial waterfalls that are actually inside the mountain. The sound was deafening but it was fantastic to get so close to them - although it was freezing inside the mountain! We made our way back towards to train, stopping for lunch on the way, when our luck with the weather ran out and the heavens opened once more. We decided to cut our loses and catch a train back to our hostel earlier than we wanted to, but managed to get a few hours of internet searching in. 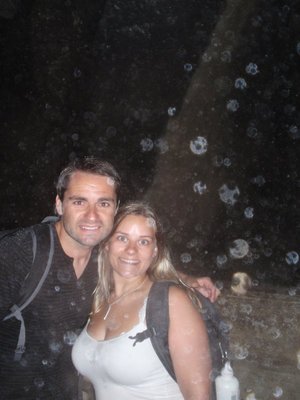 Thursday and our final day in Switzerland and the hiking boots were back on! We again caught the train to Lauterbrunnen, and then began the 2.5 hour climb (and I mean climb) up to Murren. The path was steep and both Nick and I were struggling. I really don’t think Nick enjoyed it much - probably more to do with the fact that his view of the mountains was still obscured by low clouds! We eventually made it to the top and after about an hour the cloud began to clear and we were rewarded with some beautiful views over to Jungfrau and Monch. Murren is beautiful, a small pedestrianised town perched right on the edge of the cliff and that Lonely Planet describe as “Heidi Heaven” - the perfect stereotype of a Swiss mountain town! The hike back down was obviously much easier. Half way down we met a fellow walker who was from New Zealand who gave us some great tips on what to do and where to go when we reach NZ early next year, even giving us her email address so we could contact her when we are out there - perfect! 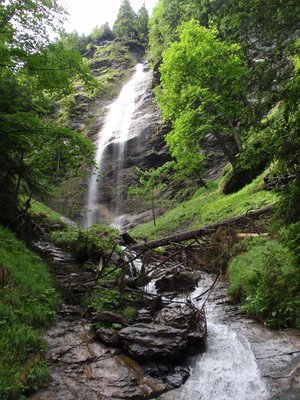 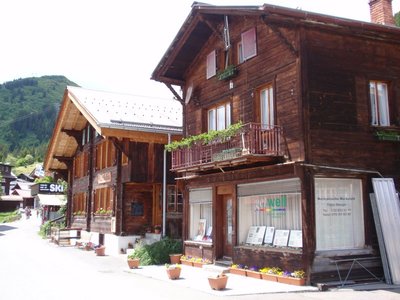 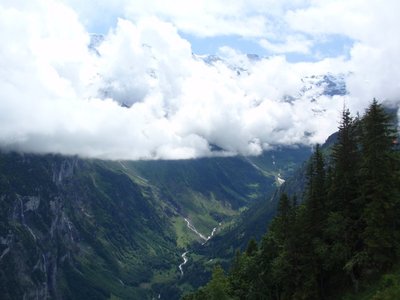 Our final night was spent getting to know some of our fellow travellers in the hostel (it is typical that you always meet nice people on the final night!). We sat for hours chatting with two guys from Canada and a girl from the US and were very jealous the next morning when they all set off on a group hike and we were not able to join them - we were headed for Strasbourg.