For those of you who know my husband he has a very annoying habit of, well, not eating regularly and moans a lot when the sun is not shining!

So on our first full day in Barcelona we woke up to an uncharacteristic overcast day which saw Nick slump into his usual mood when deprived from sunshine for too long, although to his credit he snapped out of it pretty quickly!

Anyway I tried to be sensible and organised as ever by suggesting we went to the supermarket to get some breakfast and maybe something to make sandwiches for later in the day, but Nick's response was "no, we can get something on the go" which I knew was a bad idea, but I went with it and succeeded in walking around Barcelona starving to death and rapidly becoming more annoyed with him. As no food makes Charlie a dull, moody, snappy girl!!

We stumbled across an ok looking cafe where I decided enough was enough and we were going in - after a small melt down and a decent sandwich, things seemed much better and we were both back on form to continue exploring Barcelona! 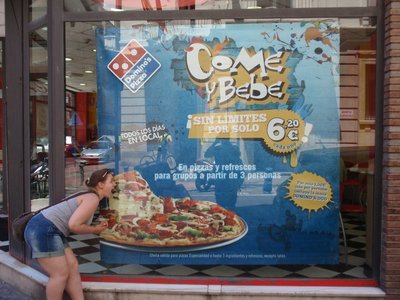 Posted by Nick-n-Charlie 17:00 Archived in Spain

enjoy every minute, you both deserve it, worked hard saved hard.