Such a beautiful horizon...

We finally arrived in Barcelona after a luxurious 5 hour train journey, the train had seats you could push back, plenty of leg room even for a normal sized person and a movie if you wanted to watch it (beats RyanAir any day!)

Once we arrived at Barcelona Sants (the main station) we purchased a T10 ticket €9.80 (It’s for the Metro, Bus and Trains and allows you to have ten trips which can be used by multiple people.) So for Nick and I we managed 5 Trips working out at €1 a trip - bargin! Once on the Metro we headed for Sant Andreu the neighbourhood our hostel was in.

On first impressions this seemed like a swanky area and upon discovering our hostel we realised we were correct. The hostel beat all expectations and was better than the photo’s! http://www.coroleuhouse-bcn.com

We were greeted by Jose Maria the owner of the hostel who was fantastic and had great English, he kept asking us if he was getting it correct so he could better it. He showed us the house, told us the cheapest places to get; fruit, breakfast, dinner, the best places to visit with the time we had, how best to get back to the airport (with all the info to hand) and gave us a Metro map.

By this time it had reached 21.30 so we made some food before getting to meet our roommates (although it turned out only for that night). We spent the rest of the evening chatting with 2 guys from Chile & Peru who were spending 3 months travelling round Europe and two girls who were studying in Valencia but were on a weekend away.

The next morning we were up fairly early and as it was a little overcast headed straight into central Barcelona were we spent most of the day exploring Barri Gotttic, Barcelona Cathedral, la sagrada familia and generally getting to know our way around the city. After our emergency cafe stop (see Lesson Number 3) we hit the supermarket on our way back to the hostel to stock up with provisions for the rest of our time, The evening was spent relaxing in he hostel, researching and sending emails. 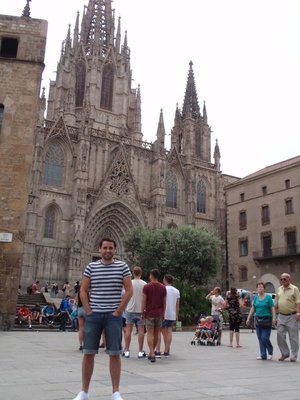 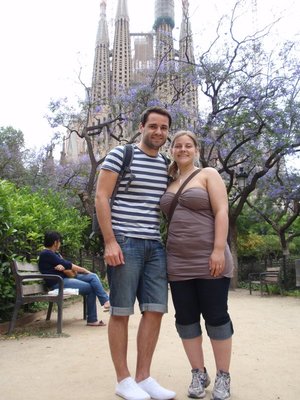 On Wednesday morning the sun was shining again (much to Nick’s delight!) so after a healthy breakfast of fresh fruit, it was back onto the Metro and hike up the hill to Parc Guell , the Guadi designed public park. Not surprisingly the place was packed full of people, so we headed away from the crowds as best we could and found some hidden gems with not to many people around. The place is beautiful with something to look at around every corner and we spent a good couple of hours exploring before heading back to the main gates and actually managing to get a photo of Nick with the famous mosaic salamander without too much pushing and shoving! 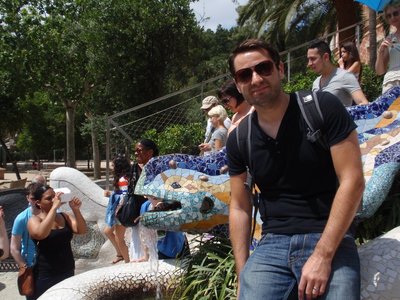 As the weather was so good, we decided the next stop really had to Barceloneta beach where we ate our pack lunch and Nick got to sunbath (again!). The beach is actually really nice, and it is s strange to think that you are only minutes away from such a huge, bustling city - and something else free to do!

Earlier in the week Nick had been contacted by an old friend who he used to work with at Paul Smith called Ornella who he had totally forgotten now lives in Barcelona teaching her native French. She had seen Nick’s Facebook status saying he was in Barcelona and asked if we were free to meet (OK so him constantly checking us in does have some advantages!). Of course we jumped at the opportunity, so our final night in this amazing city was sat eating Tapas, reminiscing and chatting until it was far too late (we only just caught our last train back as they stop running at midnight!). Fantastic to meet up with her! 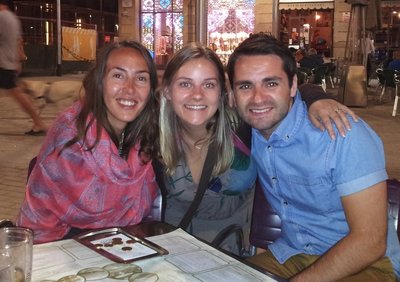 Thursday 06.00 and time to leave Barcelona (and Spain for that matter!) and make our way to the airport to catch our flight to Milan - See Lesson Number 4 - Ooops!